What Is A Bullmastiff?

One of the most imposing dog breeds in the world today would be bullmastiffs. Being a rather large domestic dog, most people might have an impression that these dogs would be quite fierce and hulking. Such an impression would only last for a little while, as a bullmastiff manages to be quite a lovely and manageable canine.

The name of the dog is derived from its breed, which is a cross between a bulldog and a mastiff. While inter-crossing dog breeds makes for a great choice, the traits that both breeds impart for a bullmastiff makes it an ideal pet for anyone who wants a big yet agile dog.

bullmastiffs can be very good watchdogs as they have originally been bred to be one. Such positive factors in their capabilities make them ideal for anyone who would want a big and imposing canine as a new family member. While they may come off as intimidating, one will find that a bullmastiff would generally be loyal and loving, and they make for great pets that you can depend on to be devoted to your family. Some of the traits that will make bullmastiffs great pets would be:

What is a bullmastiff?

English gamekeepers in England started breeding bullmastiffs the 19th century to assist them with guarding English wardens as well as gamekeeper guard estates. This has led to the name of the dog as a “Gamekeeper’s Night Dog.” Because a mastiff carries an imposing size and a bulldog often has a ferocious look, the combination of the two breeds made for a perfect dog that can clearly stand as the best guard with gamekeepers at night.

As bullmastiffs is a cross breed between two dog types, some people may think that they are an unofficial breed of dog. This has been worked on, and in 1924, the English Kennel Club made motions to recognize bullmastiffs as pure bred dogs. The American Kennel Club followed suit in 1933, and this recognition has led the world to enjoy having a great dog that is both big and loving, while at the same time, can be an efficient protector and guide.

What is a bullmastiff?

Having bullmastiffs as a pet is a good choice as they will be great as pets. One will have to exercise great care when it comes to raising them though, as such can lead to complications when not done properly. Because bullmastiffs are inherently agile and active, they can work to become aggressive if they are not properly trained. The pack dog instinct will come about and they will work into herding moving objects, and they can cause to bite defensively when encountering strangers when not raise properly.

Working on driving the temperament of bullmastiffs should always go about with one being firm and consistent. As smart dogs, if you have caught them doing something wrong and have approached punishment lightly, they will believe that they can get away with it next time. Be firm but not to fierce, and you will find that bullmastiffs will be following thoroughly at your command.

The bullmastiff has a short life span though due to a great number of possible health problems, but they do not need much exercise as they are limber and active enough. They are calm and quiet though when they become adults, and maintenance of their short coat makes for an easily cleaned and groomed dog that you would enjoy having around the house. 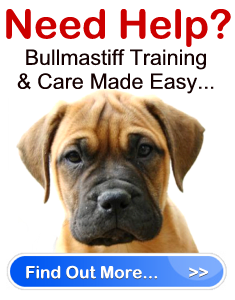